Why are spacing, edge distance, and embedment important for concrete anchors?

When an anchor is installed into concrete, there is an area surrounding the anchor called a cone of influence in which the anchor is affecting and it is affected by. When two anchors are spaced too closely to one another and/or too closely to an edge, the anchor’s cone of influence reduces or becomes interfered with. When this occurs the anchor’s  tension and shear capacities, which are obtained from test data, are significantly reduced. Most manufacturers provide reductions for tension and shear capacities for these limitations as these are common occurrences in the field. 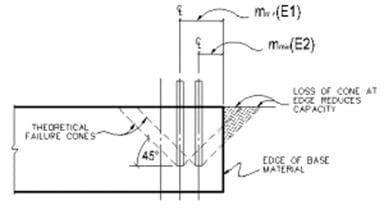 As embedment increases, the anchor’s cone of influence increases and there will be an increase in tension and shear capacities. However, embedding an anchor too close to the opposite face of the concrete can lead to spalling damage. A rule of thumb is that an anchor should generally have a minimum of 12x the diameter of anchor spacing to an adjacent anchor or to any concrete edge (check with manufacturer specifications for your use for the actual values to be used).

Also, the concrete should have a minimum thickness of 1.5x the depth of embedment of the anchor.

Engineering Express does not sell any of the data shared with us. But just so you are sure: Do not sell my personal information.
Accept
Manage consent

This website uses cookies to improve your experience while you navigate through the website. Out of these, the cookies that are categorized as necessary are stored on your browser as they are essential for the working of basic functionalities of the website. We also use third-party cookies that help us analyze and understand how you use this website. These cookies will be stored in your browser only with your consent. You also have the option to opt-out of these cookies. But opting out of some of these cookies may affect your browsing experience.
Necessary Always Enabled
Necessary cookies are absolutely essential for the website to function properly. These cookies ensure basic functionalities and security features of the website, anonymously.
Functional
Functional cookies help to perform certain functionalities like sharing the content of the website on social media platforms, collect feedbacks, and other third-party features.
Performance
Performance cookies are used to understand and analyze the key performance indexes of the website which helps in delivering a better user experience for the visitors.
Analytics
Analytical cookies are used to understand how visitors interact with the website. These cookies help provide information on metrics the number of visitors, bounce rate, traffic source, etc.
Advertisement
Advertisement cookies are used to provide visitors with relevant ads and marketing campaigns. These cookies track visitors across websites and collect information to provide customized ads.
Others
Other uncategorized cookies are those that are being analyzed and have not been classified into a category as yet.
SAVE & ACCEPT
Scroll to Top